Yesterday had the opportunity to shoot a Dillard’s in store display campaign for Vigoss Jeans.  Worked with the lovely  Michelle McHugh from APM Models. We shot in studio using a distressed club chair created by prop stylist Noah Sparke.  Looking forward to sharing the final images!

Here is a behind the scenes image shot by my assistant.  Always good to have a comfortable prop, my job gets tiring! 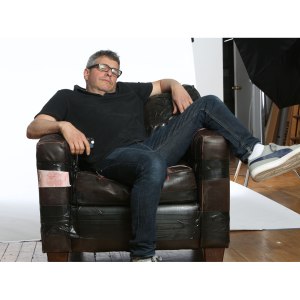 I love being busy!  Yesterday had an early start meeting my assistant at my studio to pick up gear, then head over to the client Vigoss Jeans‘ showroom to shoot for their website and social media campaign.

The showroom had an unobstructed, breathtaking view south.  However I had the difficult task to keep my eyes on the beautiful Bruna Marx from FentonMoon.  It was a very successful shoot with a fun team.

After wrapping up, getting my car from the garage in Times Square, loading up my gear, heading back to the studio, unloading my gear I started to make my way back to Brooklyn via the Manhattan Bridge.  Usually I have a fairly easy drive home, but after all, this is NYC and sometimes traffic can be a nightmare.

Unfortunately this was the case.  As I neared the bridge traffic stopped.  I switched the radio from music to news to hear about the Eric Garner protest that snarled traffic in downtown Manhattan closing off downtown bridges and tunnels.  I sympathize with the cause, am pleased that the protests were for the most part peaceful.  After an hour of being at a standstill I headed north to Soho, stopped at my father’s apartment for a visit and Chinese food while waiting for traffic to ease up.

By the time I left the Manhattan Bridge was still closed so I planned an alternate route home.  I arrived in time to catch the 11 pm news.

While stuck in traffic I had the chance to roll down my window and speak with other drivers (many cabbies).  Everyone seemed ok with what was going on.  No one was too irate or annoyed.  Although far from perfect, we are blessed to live in a society where we have the right to assemble and openly air our grievances.

Here is a view from the showroom, a behind the scenes photo and a shot of Bruna.